Gifted children who talk late are always labeled as having the Einstein syndrome.That sounds cool if you ask me especially when it is said to a parent who was anxious that their child is not hitting the language development milestone like normal kids. It is also reassuring when someone tells you that your child does not have receptive, expressive or autism disorder but they are just extra gifted and will speak at their own time.

On the downside though, labelling a kid as having the complex should be done with lots of caution. Probably the kid is just autistic with adhd or other developmental challenges and so when a pediatrician calls them extra gifted like Albert Einstein, the parent might never look to help their child.

They will just wait for their little one to turn into an genius.

Anyway, away from such worries and anxieties–we all do know the famous and gifted Albert, don’t we?

Albert was a famous German theoretical physicist whose research included works on the force and mass relation, theory of relativity as well as extensive research and contributions in quantum mechanics.

Despite how gifted he was, he spoke late. Actually, he made some comprehensible speech at 4 and developed fluent speech at 9. And that is why we have the complex named after him.

Although he died in 1955, Albert is still famous today and is credited with lots of research in Mathematics and Physics.

Albert received the Nobel Physics prize for his work on the photoelectric effect.

He is also known for his contributions on works in gravitational force and Brownian Motion.

Newton got his PhD at the record age of 26 at the University of Zurich.

He first spoke at 4 and was fully fluent at 9.

Penned by economist Thomas Sowell, The Einstein syndrome is a compilation of stories about children who were labeled as autistics but ended up being nothing but late talkers who would end up in sciency courses or as professional musicians. 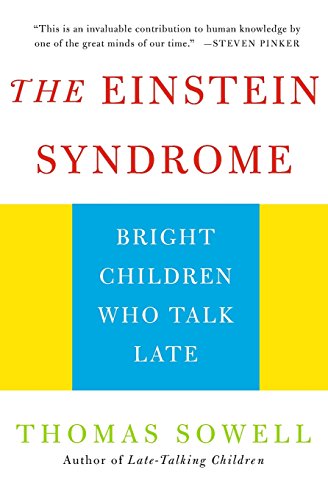 While doctors, paeditricians, occupational therapists and special needs assessors had labeled them as being in the autism spectrum disorder, the parents were adamant and felt that the children had something special in them. And well, the only thing that they had was this late talking complex.

The complex gets its name from world famous scientist Albert who himself was a late talker, showed signs of echolalia but ended up to be the man that we all remember.

But why would an economist like Thomas Sowell pen such a book about children and yet that is not his field.

Well, Thomas happens to be a parent of a kid who showed such signs. His son, John who is now a computer programmer was a late talker and displayed the characteristics discussed in the book.

Related: Was Einstein a Late Talker?

John spoke at the age of four, and he was not that fluent even then. However, as an observant father, Thomas saw that his son was open to open even the toughest of latches. His memory was also above par. The boy was clearly analytical than kids of his age.

At kindergarten, John was always bored by things that did not excite him but loved Mathematics and anything that involved computers.

Characteristics of Children with the complex according to the Book

Praise for the Book by Thomas Sowell

The book was received with praise by many parents whose children had received the retard or autistic label from other people but who felt that their children would end up expressing themselves verbally.

Here are the positive things we found about the book.

Criticism of the book: The Late Talking Complex Review by Readers

Though the book is well penned and relies on the consultations that Thomas Sowell made with Professor Stephen Camarata, a speech pathologist and professor at Vanderbilt University, the author fails to point on the need for parents to go out there to medical personnels and ask why their kids are not speaking.

The bulk of the book is anecdotal story of how Thomas’ son was able to speak after speech delay. There is no clinical evidence or medical journals quoted in the book.

It is as though Thomas is saying: “Hey, late talkers are smarter. Why? Because my kid spoke late and is smart. So if your child is a late talker, be happy, they will be smart”

Now, nobody should do this.

The author also uses a tone to show that he does not like speech therapists.

In fact, Thomas kind of demonizes speech therapists and pathologists saying that they are highly likely to tell you that your kid has some developmental challenges so that they can charge you exorbitantly for their speech therapy sessions.

He goes ahead to call them unqualified and not fit for the job if the statement below in the pdf format of the book is anything to go by:

This is a wrong approach considering that so many parents are genuinely suffering and their kids might end up as nonverbal unless early intervention is done.

Thomas Sowell does not do well by telling scared parents that everything will be alright.

I would advise every reader to take the nuggets shared in this book with a pinch of salt and if your kid is nonverbal, kindly do take them to a speech pathologist for early assessment.

Do not just sit there believing that they will turn out as gifted just like Albert or others.

If told that they are ok, then you can go ahead and wait to see how they will turn out in future.