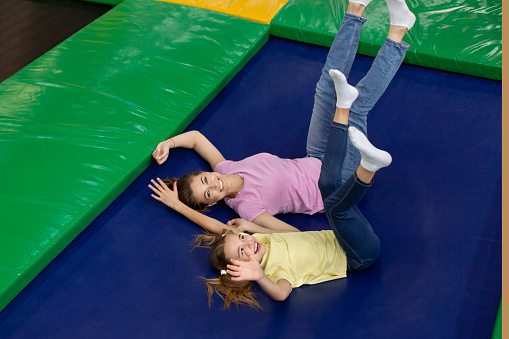 Trampoline therapy has been found to help kids with autism. Adults could also use it for their fitness. If you have hyperactive kids, you could take them to a trampoline park so that they can spend their excess energy while also having fun. For most people, getting a mini trampoline for their indoors might not be easy since it is expensive and would also take some space in the house.

They therefore opt for communal trampolines at the park. In some settings you do not have to pay anything to use this trampoline since it will be in an entertainment joint where you will buy food and drinks. While munching away your dinner you child could be bouncing away at the trampoline.

Trampoline Park for kids with Autism

Do you have a child with autism?

Trampoline parks are a great way to get kids active and having fun. But what if your child has autism? We’ve compiled some games that they can play at the trampoline park. These games will help them develop their motor skills, social skills, and more!

Your child will be able to enjoy themselves while also getting exercise in an environment that is safe for them. You won’t have to worry about any other children bothering or bullying your kid because there’s no contact allowed on the trampolines! And it’s not just for kids with autism – these games are perfect for all children who want to play outside but don’t like sports or running around too much. They’re also perfect for adults who need some exercise but don’t want anything too strenuous.

Fun things to do at a trampoline park

So what things can one do at the park trampoline?

Safety first while at park trampoline

While trampolining at the park, you need to make sure that your child is safe. How so?

Here are a few things to look into before you allow your child to jump in the park rebounder.

According to Statistics, park trampolines have been shown to cause most of the trampolining accidents. There were about 6932 trampoline accidents in 2014 according to American Academy of Pediatrics. Don Mcpherson, a gymnastics trainer says that he has been an expert witness for over 200 trampoline accident cases from 2011. He says most of the accidents involve broken necks,  dislocated elbows and shoulders which are all catastrophic for your child, right?