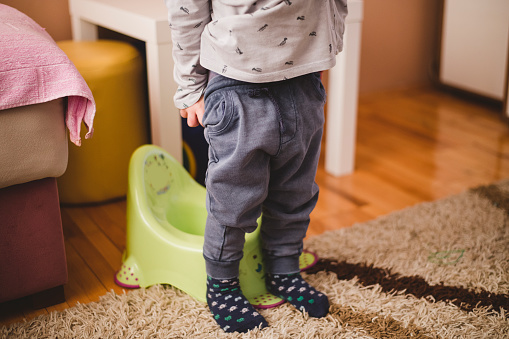 When you have a late talker, one hectic thing is training them to use the toilet.

One minute you are making progress and then the next, they have failed in all the trials.

Accidents are bound to happen when potty training, right?

Yes, but your late talking kid seems to simply forget all that you told them and you will only realize it when they have pooed or peed on themselves.

It becomes even interesting when they have pooed and that is when they come to you to point on their backs and the whiff of poo makes you realize that they just had another accident.

In fact, Thomas Sowell in his book on the Einstein syndrome that we reviewed here says that one big challenge about late talkers is getting them to use the potty.

Let me give you my personal experience on this.

When my late talking son was two, we were determined to have him use the potty.

Buying diapers was a tall order because it was both an expensive practice and at the same time, he was visibly uncomfortable wearing them. They would also cash skin rashes on his thighs.

And so, we decided that we were going to do away with them.

I went and bought this nice looking potty and was excited to try it out. He also liked how gleaming it looked. But at first, he thought that it was a play car and sat on it and tried to move around on it. He would also push it from one corner of the house to the other.

It was so funny.

So we got to start potty training him. We would use the words ‘susu’ to mean pee and ‘pu pu ‘ to mean poo.

For a start, he seemed to get the hang of it and even tried to imitate the words ‘susu’ and ‘pupu’.

But anytime I detected that he wanted to poo, he had this characteristic way of bending, I would pull out the potty, remove his shorts, get him to sit on the potty and tell him ‘pupu’.

He would not hear of it and would cry so much. He just hated sitting on that potty.

This went on for like six months with me trying to encourage him anytime he did it right.

There were lots of accidents and cries.

Now that he is three, he is able to respond when I say ‘susu on potty’. He even can feel the urge to urinate and go remove his shorts and do it.

It is so encouraging.

The only thing he has not yet mastered is the discipline to poo in the potty. He likes doing it on the floor although he knows to remove his shorts before he does it.

The problem with late talkers is that you will not be able to talk out to them.

With normal kids, they learn what poo means after you mention it countlessly and begin to associate poo with the action. They will also be able to recognize what a potty is and know to squat when they need to use it.

For late talkers though.

It is a different story altogether.

If the toddler has receptive language disorder, they will not know what you just told them when you say ‘go and poo poo’. They will also not be able to recognize it when you say ‘go to the potty’.

For kids with expressive language disorder, they might feel the urge to poo and want to tell you that you need to help loosen their clothes. But since they lack sufficient language for this, you will just hear a babble and some incomprehensible words that you cannot make out.

For kids with receptive language disorder, they will have a problem with your saying ‘go and poo in the potty’.

To them that is foreign gibberish.

It would be good if you used one word statements and ensure that they child is not distracted by other things when you are talking to them.

I for example use the word ‘pu pu’ or ‘susu’ because over time he has to come to relate to what they mean and so he will most at times respond appropriately, dismiss me or run away if he does not have the urge to use the potty.

Rome was never built in a day.

This adage fits best the kind of dramas, accidents, cries and struggles you will have to face when toilet training your speech delayed toddler. Even normal kids have trouble learning to use the potty.

So why would the path to potty training a speech delayed kid be any easier?

Do not beat yourself down or be harsh at your late talking toddler because they seem not to learn things as fast as you would like them to.

Even if the child seem not to learn what to do, don’t give up on them. Consistently keep on trying to get them use the potty for any of their biological needs. It might take time but you just keep on keeping on because it will surely pay off at the end.

One trick to have your kid potty trained is to dress them in loose fitting shorts that are easy to remove. On warm days, you could even have them without any shorts so that they will only need to sit on potty and do their business without the hustle of removing trousers or shorts.

You could show your late talking toddler videos of other kids as they use the potty. This way, they will know what it is for and then get them to imitate what they just saw in the video.

If you have siblings a little bit older than your late talker, you could ask them to accompany the kid to the toilet and show them how it is done. The child will try to imitate their elders and will slowly learn how to do it.

In preschool, there is always that time when the teacher wants all the kids to use their potties. Late talkers will benefit so much from this as they see how others are able to use theirs and they will imitate them.

Children also tend to be more disciplined and instructable when they are in school as compared to how stubborn they can be while at home.

When your child gets it right, throw in praise words that will encourage them to continue using the potty as well as follow instructions. And what of when they fail, you need to still encourage them so that they can do it right the next time.