2 years is the hallmark of child development. This is the age where most children will have developed locomotive abilities, talk even if it is a babble, have developed interest in playing with others.

At this age, you will also notice that the kid will have developed an interest in a few activities and you can comfortably take them to a day care if you are held up in a demanding job or leave them to a nanny.

Most mothers would also want to wean their kids at this age.

But what if you toddler has not hit these milestones?

Yes, but do not panic. It is at such a time that you need to think of early assessment with a good pediatrician so that they can troubleshoot problems that your child has.

Seeing a pediatrician at this time, as opposed to the wait and see approach, is also therapeutic for you as they are going to explain to you about how your child is growing from a authoritative medical point of view.

Most autistic kids will however have not developed speech by the age of 2 years. While most people will want to call them nonverbal, I do not like calling them that because that word is misleading and sounds like a finality.

I would rather call them ‘preverbal’ since that word expresses hope and need for work so that the preverbal kid can become fully verbal. Other characteristics that you will see in your preverbal autistic kid at this age include:

Nonverbal kids on the spectrum will also not follow your gestures no matter how often you use them to point out on objects in the house. Everytime you do a gesture, the kid will just stare blankly and not show any sign of understanding what you want them to do.

When you call out the name of your preverbal kid, they will not show any interest in the name or even show recognition that you called them out.

Kids on the spectrum struggling with verbal communication will also show signs of lack of social interaction with others.

Hope however is not all lost for nonverbal autistic kids at 2 years.  In fact it is a good thing when parents detect that their kid is nonverbal so that they can start working on the verbal communication of the kid as early as possible.

In this post, we look at the different toys that parents can buy their kids so that they can develop verbal communication. Here we go: 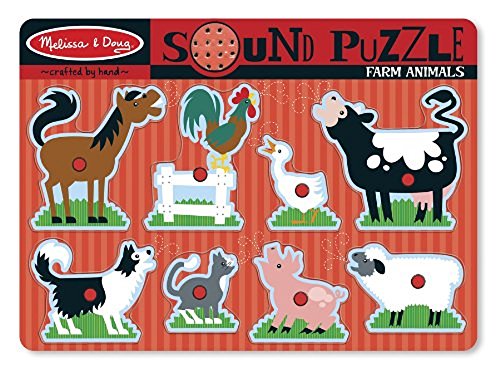 We have already reviewed the Melissa and Doug Farm Animals Sound Puzzle. Here the kid positions the eight animals in the game into their respective slots and when they do so, they are rewarded by the sounding off of the animal. For example, the kid will take a cow, place it in its right spot, they will be rewarded with the moo sound of the cow.

The game comes with 2AA batteries as well as a speaker that makes the audio sounds. The game is thrilling for kids and they will be able to learn the various sounds of animals. At the same time, they develop good fine motor skills as they move the animals into their various spots. It is also colorful and therefore very visually entertaining for your kid.

After sometimes, the kid will want to make the sounds of the various animals in imitation of the game. Here you can then remove the batteries and have the kid making the sounds on their own without the speakers of the game.

What we loved about the game

The MKGames feelings is played by two people. It has faces of people with different facial expressions. You are supposed to have your kid identifying the expressions and imitating them. It brings in social interaction as well as bringing in the parent into the play world of the child.

What we loved about the game

The See and Spell Game

The see and spell game is another classic ideal game for kids with nonverbal autism. It is designed by Melissa and Doug and one thing that I have come to realize is that the two are good in their craft and whatever they touch has to be really good. The game involves seeing animals and spelling them. This way, your kid will learn how to spell things out as well as identify different animals.

What we loved about the See and Spell game

Check: Cause and Effect Toys for speech therapy