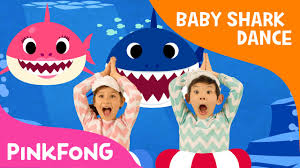 Most parents who have toddlers and have access to a smartphones might already know what the Baby Shark doo doo doo song is all about.

It is a catchy repetitive song about sharks that has become an internet sensation among toddlers as well as adults. It is contagious and once you listen to it, you want to do it again and again.

It is an earworm that you will sing at work, while travelling home and with your kids.

The dance moves are also easy and everyone in the family will try to imitate them.

What you probably do not know is that it was designed to be that way; to be an earworm. The baby shark song is meant to intrigue toddlers and to have them crave for it. A Facebook friend of mine has called it poison. Why, his kid will wail at 1.00 am and have no one able to comfort him but baby shark song will lull him to sleep.

While it is nice, an earworm and entertains your baby, it might actually be causing speech delay which most parents might think is autism.

Most news publication have said that there is a science used in creating the baby shark doo doo doo song. According to the Daily Beast, the repetitive words and the fast tempo in the song trigger the pleasure center in the brain.

And that is why it is so catchy. That is why it already has 3 billion Youtube views and a load of comments, renditions and kids wailing for it.

What most people do not know is what exactly the song is doing to their kids. Research has it that screen time more than 2 hours per day for kids less than 2 years could greatly hamper their expressive language skills. It also brings hyperactivity and behavioral problems. Very soon, we will start hearing parents complaining that their kids have speech delay.

Others will think that they have nonverbal autism and go ahead to hire speech therapists thinking that their kids need help yet the speech delay was all their doing. They will even buy toys for autistic kids in the hope that they are helping their kids out learn how to talk and gain social skills. But lo, the kid has no autism!

In the developmental stages of a child, a kid below 2 years requires no screen time according to the Canadian Pediatric Society.

Those between 2 to 5 years should have at most 1 hour screen time watching programs that are regulated, have parents watch them together with the kid and they should be in such a way that the parent can fuse the content into a kids everyday lives. Not to mention that the parent should talk to the child as they watch the program.

Instead of employing screens to do the dirty work of rearing the kids for you, do it yourself. You bore the child, didn’t you?

Research has it that kids who have lots of screen time before they develop language skills tend to take longer as compared to those who have little or no screen time per day. Why? Because they know that speech is between people, with them and their parents or with other preschoolers.